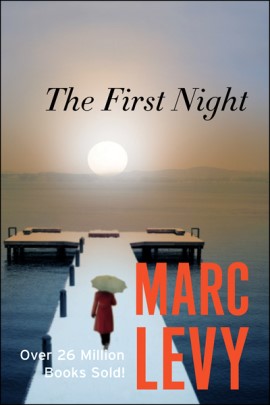 Love is the ultimate adventure, but it can be dangerous.

“The legend goes that when you are in your mother’s womb, you know all about the mystery of creation, the origins of the world until the end of time. When you are born, a messenger flies over your cradle and puts a finger on your lips so that the secret of life will never escape. The finger erases your memory forever and leaves a mark, which all of us have above our upper lip. All of us, except me.   The day I was born, the messenger forgot to come and see me, and I remember everything.”

From the top of Ethiopian plateaus to the frozen lakes of the Northern Ural, Marc Levy’s latest novel concludes the breathtaking epic started with The First Day.

The First Night was published in France in December 2009 and went straight to the top of all the best-seller lists in France, following in the footsteps of the first volume, The First Day, published in June 2009.

“In The First Night, love is a dangerous, exhilarating adventure, which brings together science, fantasy, police intrigue, and journeys across the world in a narrative written by a great admirer of Jules Verne.”  –Télé 7 Jours