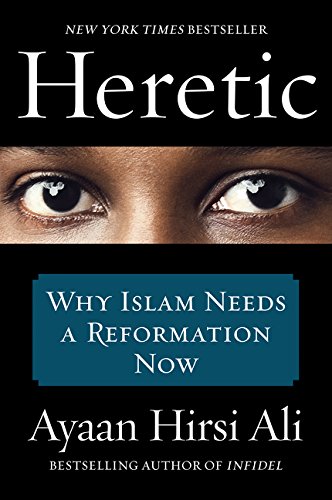 Why Islam Needs A Reformation Now

“I found it shatteringly convincing, every page. . .  It’s the most important book I’ve read for years.” – Richard Dawkins

With bracing candor, the brilliant, charismatic, and uncompromising author of bestselling Infidel and Nomad argues that it is foolish to insist, as our leaders habitually do, that the violent acts of Islamic extremists can be divorced from the religious doctrine that inspires them. Instead we must confront the fact that they are driven by a political ideology embedded in Islam itself. Today, she argues, the world’s 1.6 billion Muslims can be divided into a minority of extremists, a majority of observant but peaceable Muslims, and a few dissidents who risk their lives by questioning their own religion. But there is only one Islam and, as Hirsi Ali shows, there is no denying that some of its key teachings-not least the duty to wage holy war-are incompatible with the values of a free society.

For centuries it has seemed as if Islam is immune to change. But Hirsi Ali has come to believe that a Muslim Reformation aimed at reconciling the religion with modernity-is now at hand, and may even have begun. The Arab Spring may now seem like a political failure. But its challenge to traditional authority revealed a new readiness-not least by Muslim women-to think freely and speak out.

Courageously challenging the jihadists, she identifies five key amendments to Islamic doctrine that Muslims have to make to bring their religion out of the 7th century and into the 21st. And she calls on the Western world to end its appeasement of the Islamists. “Islam is not a religion of peace,” she writes. It is the Muslim reformers who need our backing, not the opponents of free speech.

Interweaving her own experiences, historical analogies, and powerful examples from contemporary Muslim societies and cultures, Heretic is not a call to arms, but a passionate plea for peaceful change and a new era of global toleration. In the wake of the Charlie Hebdo murders, with jihadists killing thousands from Nigeria to Syria to Pakistan, this book offers an answer to what is fast becoming the world’s number one problem.
“It is nothing short of a miracle that Ayaan Hirsi Ali, one of the heroes of our time, is still alive… Ayaan Hirsi Ali is vaccinated against discouragement; she exercises what she calls ‘the power of blasphemy;’ she continues her campaign against the fanaticism and stupidity that vilify our time and fill it with corpses…” – MARIO VARGAS LLOSA
“Heretic proposes a path for Islam… that could be of immense importance, not only for Muslims but for the whole world.” – NATIONAL REVIEW
“Truly a hero of our time… She is defying the jihadi censors, the misbegotten hate-speech laws, and the polite conventions of Western debate that all tend to limit what can be said about the relationship of Islam to modernity.” – POLITICO
“Hirsi Ali’s vital, eloquent and clear-sighted manifesto should be read and heeded by anyone concerned with the advancement of liberty.” – THE TIMES
“Not many people have lived deep inside a ruthlessly patriarchal, theocratic world and also won acclaim in the great bastions of Western, liberal thought… The writings of Ayaan Hirsi Ali on religion, culture and violence always command attention.”  – THE ECONOMIST
“An optimistic book.” – THE NEW YORK TIMES