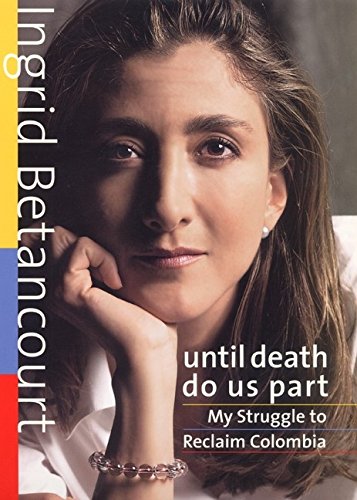 Until Death Do Us Part

My Struggle to Reclaim Colombia

A passionate and very personal political memoir by the Colombian presidential candidate, who captured the world’s attention when she was kidnapped by the FARC and held prisoner for six years.

On February 23rd 2002 the Colombian presidential candidate Ingrid Betancourt was kidnapped by the FARC and then held hostage in harrowing conditions for the following six years.

This is the moving memoir she wrote before she was kidnapped. Ingrid grew up among diplomats, literati, and artists who congregated at her parents’ elegant home in Paris. Her father served as Colombia’s ambassador to UNESCO and her mother, a political activist, continued her work on behalf of the country’s countless children whose lives were being destroyed by extreme poverty and institutional neglect. Intellectually, Ingrid was influenced by Pablo Neruda and other Latin American writers like Gabriel García Márquez, who frequented her parents’ social circle. She studied at the Institut des Etudes Politiques in Paris, a prestigious academy in France. From this charmed life, Ingrid Betancourt – not yet thirty, happily married to a French diplomat, and a mother of two children – returned to her native country in the late 1980s.

On what was initially just a visit, she found her country under internal siege from the drug cartels and the corrupt government that had allowed them to flourish. After seeing what had become of Colombia’s democracy, she didn’t feel she could leave.

Until Death Do Us Part is the deeply personal story of a woman who gave up a life of comfort and safety to become a political leader in a country being slowly demolished by terrorism, violence, fear, and a pervasive sense of hopelessness. It is a country where democracy has been sacrificed for the well-being of the few, where international criminals determine policy, and where political assassinations are a way of life.

By the age of forty, Ingrid Betancourt had been elected and re-elected as a representative and as a senator in Colombia’s national legislature. She had founded a political party that openly confronted Colombia’s leaders and earned the respect of a nation. She became a target for the establishment and the drug cartels behind it. Forced to move her children out of Colombia for protection against death threats, Ingrid Betancourt remained and continued to fight the political structure that has crumbled under the destructive power of the drug cartels, and the passivity of government-for-sale. Here is a political cocktail that has destroyed countless lives in Colombia and has spread to countries beyond its borders.

Until Death Do Us Part is a hair-raising account of one woman’s fight against the establishment. It is a story of a woman whose love for her country and faith in democracy gave her the courage to stand up to the power that has subjugated, intimidated, or corrupted all those who opposed it. A chilling account of the dangerous, byzantine machine that runs Colombia, it is also an inspiring story of privilege, sacrifice, and true patriotism.