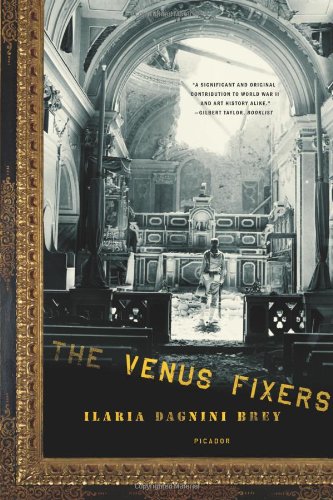 A charm-filled and adventurous account of the eclectic army unit formed by the Allies during WWII to save Italy’s great artistic treasures.

Italian-born journalist Ilaria Dagnini has uncovered a touching and adventure-filled story whose heroes are a charming and diverse group of intellectuals and soldiers who fought alongside Italians to preserve some of the world’s artistic wonders. The Venus Fixers formed a little-known cadre of American and British aesthetes-cum-soldiers who were sent to Italy by Roosevelt and Churchill to protect and rescue some of the world’s most valuable artistic treasures. This team of officers, officially dubbed “Monument Officers” but referred to by the initially suspicious Army brass as “The Venus Fixers,” were fighting a parallel war alongside art-loving Italians, which they ultimately won, but which has since been forgotten. The hundreds of thousands of tourists filing through the Uffizi Gallery in Florence every year would be surprised to know that the Titians and Botticellis on view were sixty years earlier stashed in the basements of countryside castles while Allied bombs were strafing the center of the city. Ilaria’s story is one part Simon Winchester and one part Stephen Ambrose, with colorful characters-Ivy League and Oxbridge erudite all-dropped into the middle of a war zone. It was a time of extreme danger but also of unparalleled excitement for these men (many of whom became life-long friends), most of whom left indelible marks not only on their respective academic fields but on their adopted country of Italy as well. The book also presents art historians, archeologists, archivists and museum curators, as driven by their passion for art as their fellow soldiers were driven by patriotism or politics. A fresh and surprising episode from World War II, Ilaria stumbled across it while writing an article for an Italian magazine about the restoration of some frescoes in her hometown of Padua. (a small section appeared in Travel & Leisure). She is not an academic, though she has the instincts of an historian. Mostly, though, she became consumed with this story through her pride in her country’s cultural heritage and her admiration for the foreign men who saved it from ruin.