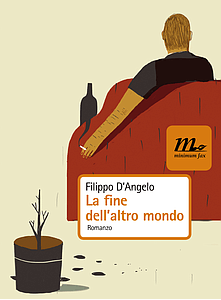 Summer 2001: Genoa is abuzz with preparations for the G8 Summit and young protesters taking to the streets with calls for a better world.

Twenty-eight-year-old doctoral student Ludovico is oblivious to the anti-globalization movement. His self-obsessed parents-1960s protesters turned ineffective intellectual complainers-have left him derisive of politics in general. Instead, he is possessed by a long forgotten utopian novel by Cyrano de Bergerac, The Other World, the lost final chapter of which he hopes to recover. The only person who seems to understand him is his younger sister, Umberta, who imitates Ludovico’s pessimistic and self-destructive ways.  As the G8 summit approaches and riots break out across Genoa-the old world seemingly about to disintegrate-Ludovico spirals further into his literary mystery, traveling to Paris and then Moscow, only to discover that it holds a significance for his own uncertain era.

In this striking début novel, Filippo D’Angelo creates a gripping, mordant, and darkly funny literary puzzle. Framed within a stunning indictment of bourgeois complacency and idealism of all stripes, The Other World is a rare achievement and a literary tour de force.

Praise for The Other World, Winner of the Premio Letterario Albingaunum:

“This book has an anger and substance that Italian novels have been lacking for a long time.” -IL MANIFESTO

“Filippo D’Angelo’s novel is edgy, convulsive, rhythmic. One is struck by this newcomer’s absolute linguistic and narrative skill.” – LA REPUBBLICA

“A novel that you will read with pleasure. . . A captivating story of the disillusionment of youth. . .” – TUTTOLIBRI/LA STAMPA

“The literary event of the summer has Genoa’s bourgeoisie trembling with fear. The author masterfully weaves tragedy and comedy in an irresistible thread.”  – IL SECOLO XIX

“D’Angelo’s first novel shines through as one of the most complex and open of the year: it conveys an intelligence, a moral rigor, and a specifically literary, philosophical and sociological culture that are both rare and most welcome. These kinds of novels are rare, as are these kind of authors.”  – LO STRANIERO

“The strength of the novel lies in its ferocious criticism of the bourgeoisie. . . Clearly a success.” – Il SECOLO XIX