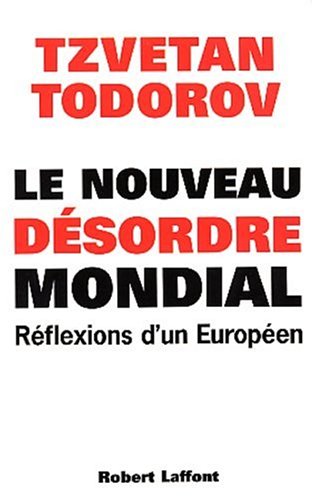 An Essay on Europe and America

An illuminating essay that synthesizes today’s debates and outlines a path for Europe to become a counterweight to America’s current domination of world affairs.

“Few of the texts dedicated to recent world events have seemed to me as profound or as powerful as this foray into the domain of international relations by one of the most important intellectuals of our time.” – Stanley Hoffmann, Harvard University

In eight concise chapters, Todorov analyzes the use of force versus diplomacy, the emergence of new powers, and the reactions of the different players (UK, France, Poland, The United Nations amongst others) to America’s foreign policy. He focuses on the rise of the neo-fundamentalists in the US and Europe’s unique position in the balance of world power. Todorov goes on to reassess the role Europe currently plays and more importantly, should and could lay claim to. Drawing on his vast knowledge of history and philosophy, Todorov has written an insightful and timely essay that, without simplifying the issues, is accessible to all.

Stanley Hoffmann, a Harvard University Professor and frequent contributor to the New York Review of Books, Foreign Policy and The New Republic has written the preface.