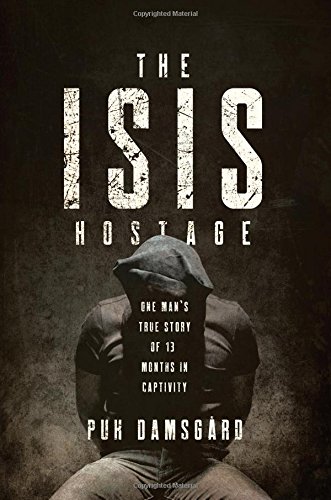 The dramatic story of Danish freelance photographer Daniel Rye, who was held hostage for thirteen months in Syria by ISIS, as told with award-winning journalist and writer Puk Damsgård.
A #1 bestseller and Winner of the prestigious Cavling Prize for journalism.

The ISIS Hostage is the dramatic story of Danish freelance photographer Daniel Rye and his thirteen months being held captive in Syria by ISIS, as told by award-winning journalist Puk Damsgård.

This riveting narrative offers an inside glimpse into the suffering of the nineteen hostages held by ISIS alongside Daniel, and the misery inflicted upon them by their British guards, nicknamed “The Beatles,” especially the terrorist known in the media as “Jihadi John.” It is also the account of the secret investigation and negotiations launched to locate and free not only Daniel Rye but also fellow hostage James Foley, the American freelance journalist who was beheaded in August 2014.

In June 2014, Daniel Rye was the last hostage to leave the ISIS prison alive, carrying a message from James to his family in the U.S. Two months later, ISIS began killing the remaining British and American hostages-Daniel’s friends, with whom he had spent harrowing months of captivity and torture.

The ISIS Hostage is a moving and terrifying story about friendship, torture, and survival, and brings to light one of the most spectacular and tragic international kidnapping cases in recent years. Daniel’s story introduces readers to the people who guarded, tormented, and fed him, some of whom were product of Assad’s Syria, while others came from our own Western societies.

Touching on the historical undercurrents and political realities that led us to this point, and with unparalleled access to Daniel and those involved in his rescue, The ISIS Hostage illuminates one of the most challenging-and terrifying-sociopolitical situations in recent memory.

Puk Damsgård has been DBC’s Middle East correspondent since 2011, having previously lived in Afghanistan and Pakistan for many years. As a journalist and writer she has won various awards, most recently the National Press Club of Denmark’s Storytelling Prize and the 2015 Readers’ Book Prize for her previous book, the bestselling Where the Sun Cries (Politikens, 2014), about the war in Syria. Her other books include Wolves’ Hearts (Politikens, 2011) and Land of the Pure (JP’s Forlag, 2009).