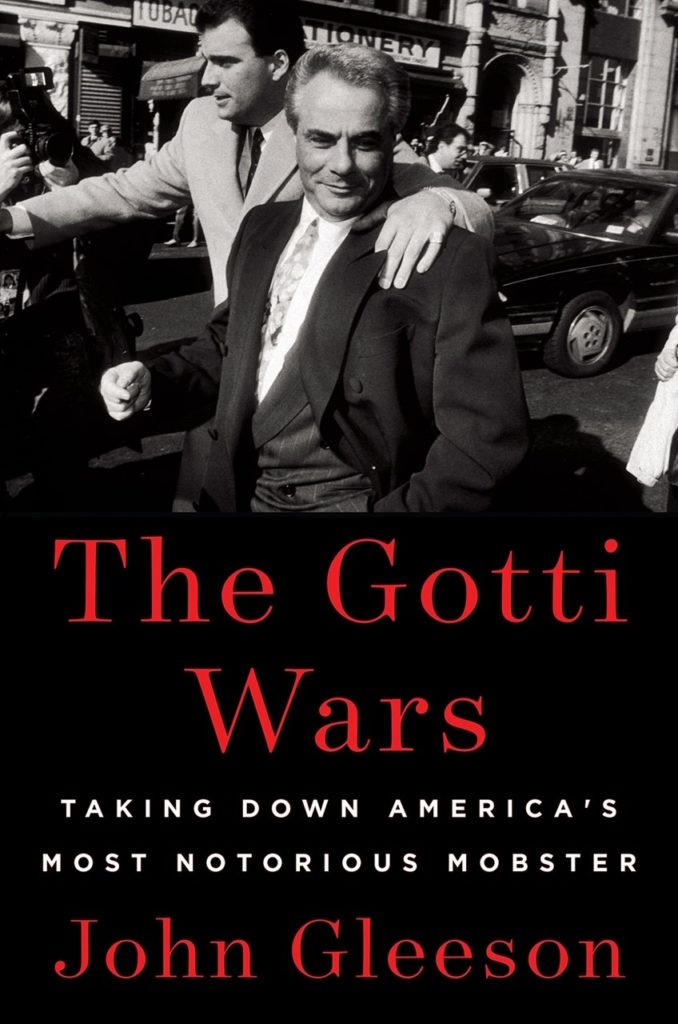 The true story of the two trials of John Gotti and his final conviction— which led to the demise of the Gambino Family and the eventual destruction of La Cosa Nostra.

Nicknamed “The Teflon Don” for his uncanny ability to beat criminal charges, Gotti dominated tabloids throughout the world, becoming a household name in 1986 when he was featured on the cover of Time magazine. His adversary every step of the way was John Gleeson, a young Assistant United States Attorney assigned to Gotti’s first case and the lead prosecutor in the second.

Written from the in original source materials— case filings, recorded conversations, and trial transcripts— The Gotti Wars presents a study of two men locked in courtroom combat: of Gleeson, as he hones his craft as a lawyer, and of Gotti, as he brazenly does everything in his power to avoid conviction. At once a riveting memoir and a thrilling drama of betrayal, intimidation, and the fight for justice, The Gotti Wars unspools an intricate narrative with clarity and deepening, gear-turning suspense.

“Spellbinding…tells us in electrifying detail how the good guys finally won, how justice triumphed over evil, and how Gleeson himself was transformed by his long war.” —Nelson DeMille, New York Times bestselling author of The Gold Coast and Wild Fire “A unique unveiling of the prosecutorial strategy that vanquished the American Mafia’s most exalted late 20th century gangster. As a bonus, Gleeson offers candid views of the skills and shortcomings of his main opponents: the Teflon Don’s battery of mob lawyers.” –Selwyn Raab, New York Times bestselling author of The Five Families “Shines a spotlight on a man who, to some extent, was undone by his own vanity.  Unable to resist the lure of being widely known and feared—to the point where he became a huge celebrity—John Gotti flashed an arrogance and audacity that became a gauntlet thrown down to law enforcement….To his credit, Gleeson shows, in this absolutely riveting memoir, that Hollywood’s image of a prosecutor who does it all by himself is pure fantasy. Ultimately, The Gotti Wars is a testament to the camaraderie that forms around any consequential prosecution. In the early 1990s, John Gleeson and his team brought down one of the most dangerous men—and dangerous criminal organizations—ever to terrorize America. In these pages, you get to experience how touch and go it actually was.” –Eric Holder, 82nd Attorney General of the United States “Vivid, evocative, and genuinely suspenseful…An impressively detailed account of what it was like in the late 80’s and early 90’s to be chasing a flashy, dangerous mobster who had morphed into a pop culture icon…. John Gleeson is one of the most gifted prosecutors ever to match up against the Mafia.  As I should have guessed, he is also an immensely gifted storyteller. –Mary Jo White, former Chair of the SEC, former US Attorney for the Southern District of New York, and former Acting US Attorney for the Eastern District of New York “Absorbing, even inspiring…Epicenters of media attention, the courtrooms in which the fates of John Gotti and his co-defendants were decided became—over a period of months and ultimately years—scenes of magnificent legal combat…. Second chair in the first case and lead prosecutor in the second, John Gleeson had to continually improvise to thwart defendants who would resort to any ploy, legal or otherwise, to gain their freedom.” –David N. Kelley, former United States Attorney for the Southern District of New York