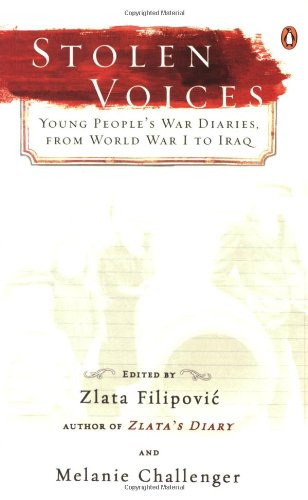 Author of bestselling Zlata’s Diary, Zlata Filipovic, and Melanie Challenger compile and edit a collection of war diaries kept by children since the First World War.

In 1992 Zlata Filipovic found herself caught in the siege of Sarajevo. The diary that she had begun as a carefree twelve year old became a war diary – a record of the devastation that was unfolding around her – and a testament to a child’s life under gunfire. Zlata’s Diary went on to be published in 35 languages and, to this day, is studied in schools around the world. With the help of her co-editor Melanie Challenger, Zlata has spent the past two years compiling this collection of war diaries from around the world. Many of them have never been published before or have been forgotten. They are all written by children and young people under the age of twenty-one, who have lived through wars – both civil and world – since 1914. This collection is the first of its kind to expose the universality of the experience of conflict by young people, wherever and whenever these atrocities have occurred. It captures the moments of desperation, confusion, injustice and pain, as well as those perhaps less expected instances of mundane everyday events, the continuations of life and the process of growing up, of hope, humour, plans, and ambitions. Spanning the world over nearly a century, it is as though these various voices are talking to each other, complementing each other and singing together in one single voice of stolen childhood and irreplaceable youth.