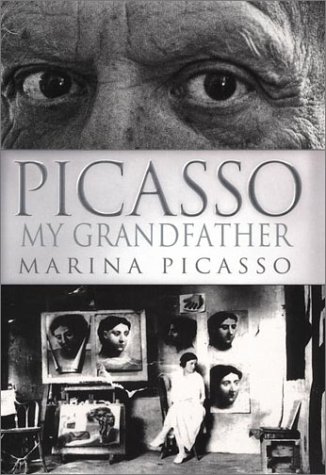 “.women, friends, children or grandchildren, his victims had to be sacrificed to his art. He was Picasso. He was a genius.” – from Picasso : My Grandfather.

Marina Picasso, granddaughter of the twentieth century’s greatest painter, watched as those she loved most were destroyed by the man the world revered as a genius creator. Her grandmother, who sacrificed her home and career as one of Diaghilev’s ballerinas for the young Picasso, was quickly abandoned. Her father, Paulo, after years of servitude as Picasso’s chauffeur, steadily drank himself to death. Her mother sank into a fantasy world, chasing young men and leaving her children to care for themselves. Amidst the poverty and indifference inflicted upon them, Marina and her beloved brother, Pabilto, clung together, nursing a longing for family and the hope that one day they might prove their worth to their grandfather, until finally, Pabilito committed an excruciating suicide, leaving Marina alone.

In the end, Marina was the sole survivor of Picasso’s first family, an unwilling witness to a lifetime of betrayals, rejections, provocations. Picasso: My Grandfather is a vivid and powerful memoir of the private world of the iconic painter and a moving account of a life rebuilt from the emotional wreckage the artist left behind.