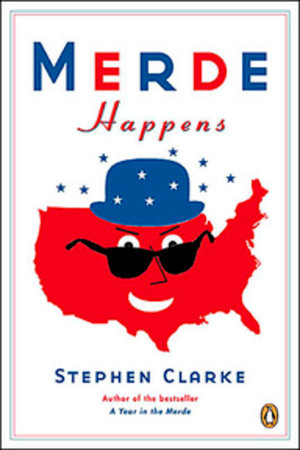 From the bestselling author of A Year in the Merde, Merde Actually, and Talk to the Snail, the third volume of Paul West’s escapades, in which our hero leaves Paris for a cross-USA adventure: an immediate top 10 bestseller in the UK.

Paul West is driving across the USA in a Mini, and feeling just as foreign as he ever did in France. He has accepted a job promoting the UK as a tourist destination. His tiny car is supposed to symbolize Britain’s image – self-deprecating, fun, stylish but not snobbish. But to Americans it looks plain cramped.
The car feels even more cramped than normal because Paul is sharing it with his French girlfriend Alexa, who has come along to make an on-the-road documentary about American cultural colonialism and similar French preconceptions. The Mini will get even more overloaded when, at various times in the story, Paul and Alexa are joined by Paul’s American friend Jake (whose English has now become so gallicized that only the Cajuns can understand him), a young hitchhiker who claims to be on the way to Las Vegas to begin her MA in cheerleading, and a very bad Prince Harry imitator.
Paul has to drive coast-to-coast to a tight deadline, putting on “typically British” publicity stunts in certain key cities. Finally, he is to deliver the plucky little car to Hollywood as the centrepiece of Britain’s bid to be voted Tourist Destination of the Year and host the next World Tourism Fair. With France, China and the USA also in the running, national pride is at stake, as is Paul’s bonus… And, yes, the novel also features an extra ingredient that no comparable book — The Italian Job (with only one Mini but several more cities), Fear and Loathing in Las Vegas (with fewer drugs and no actual loathing), and On the Road (without all that tedious free jazz) — could offer: merde.