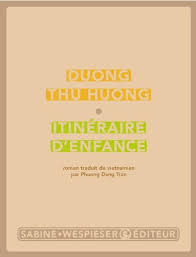 First published in 1985, Journey into Childhood remains among Duong Thu Huong’s best-selling and most-loved novels in Vietnam, where it is considered a modern classic.

Set in rural Vietnam in the late 1950s, Journey into Childhood is a unique, enchanting coming-of-age story. It follows a lively young girl – both naive and daring, as a 12 year-old can be – who sets off from her country village into pre-war Vietnam. In Bê’s small town, the train track divides the good and bad neighborhoods, the circus comes to visit, and children pass their days playing in the river; when an abused boy runs away with the circus, the locals blame the disappearance on witchcraft – and without much ado, return to their everyday lives. But this calm life is shaken when Bê defends one of her schoolmates against the advances of a gym teacher. Instead of justice being served, she finds herself suspended from school… So Bê sets off with her best friend to see her father in his garrison in the north, to ask him to come back and defend her. The Journey takes her across a country now long lost and describes it like it has never been before. One of Vietnam’s most popular and celebrated writers, Huong has been published around the world to critical acclaim: “extraordinary and profoundly tragic” (Boston Sunday Globe), “astonishingly powerful” (Los Angeles Times Book Review), and “breathtakingly original” (San Francisco Chronicle). Journey into Childhood is one of the cornerstones of her success.