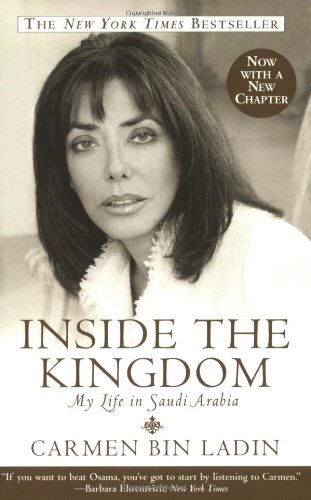 My Life in Saudi Arabia

A fascinating and insightful look behind the closed doors of one of the most repressive kingdoms in the world.

On September 11th, Carmen Bin Ladin was driving to her home in Switzerland with one of her three daughters. When she heard the news on the radio that the Twin Towers had been struck she instinctively felt that her brother-in-law must somehow be involved in these horrifying acts of terrorism. Her heart went out to America – a place she considers her second home, a country that she had encouraged her daughters to embrace. She also knew that from then on their lives would never be the same.
Carmen’s story takes us inside one of the most powerful, secretive and repressive kingdoms in the world. In 1974 this striking woman whose mother is Persian and father Swiss, married Yeslam Bin Ladin and found herself inside a complex and vast clan, part of a society that she neither knew nor understood.
As a young bride in love, Carmen made every effort to adjust to Saudi custom and regulations. She learned Arabic, she accepted the restrictions imposed by the veil, she learned to avoid ever being seen by a man without her husband’s permission, she never drove her own car. Yeslam in turn made concessions to her. He gave her extensive freedom at home and involved her in his work. He considered himself a “liberal” in many respects, and wanted his wife – his only wife – to play a full role in his life.
During the nine years that she lived in Saudi Arabia, Carmen witnessed the influx into the country of inordinate amounts of material wealth. She hoped, and wanted to believe, that this “material revolution” would generate a transformation in Saudi mentality and culture. But by 1985, she realized that, in the space of just a few years, this medieval country had evolved into a high-tech feudal society, riddled with hypocrisy and contradictions.
By now Carmen was the mother of two daughters. The compromises she had accepted for herself were insignificant compared with the restrictions imposed on her daughters. When she looked around her, she saw her daughters’ lives mapped out before them. If they stayed in Saudia Arabia, they would become prisoners in a golden cage.
In 1985, during one of her annual holidays, Carmen seized an opportunity to settle back in her home country, Switzerland, with her children and husband. Three years later when her marriage to Yeslam fell apart, she began the protracted and painful divorce proceedings that are still not settled today. Yeslam, Osama Bin Ladin’s half-brother and the wealthiest member of the Bin Ladin family, is still based in Switzerland.
Since September 11th, the inherent contradictions within Saudi society have begun to surface. Carmen’s story provides a unique insight into this world and the Bin Ladin family’s role within it. She is one of the few women to have acquired, through her husband, intimate knowledge of the inner workings of this society. Then, by leaving it, she became one of the rare mothers of Saudi daughters to succeed in safeguarding the freedom of their children.
But her daughters still carry the name of Bin Ladin. And it is principally for them that Carmen is writing this book. She wants them to know the world they were born into, the world she has protected them from. She also hopes that, through this book, they will come to understand the complex heritage that will always be theirs.