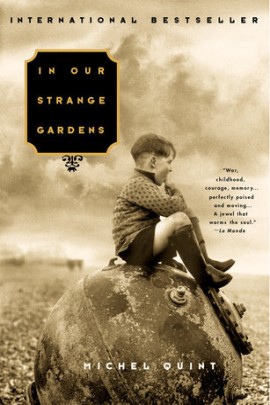 In Our Strange Gardens

Michel has a story to tell. Something that he remembers. Something someone else once remembered for him. It’s about his father, an ordinary man, and his cousin, a man with an extraordinary secret. Years ago, in the bitter years towards the end of World War II, two cousins found themselves at the mercy of a German guard following an explosive act of resistance. Thrown into a deep pit with a small group of terrified hostages, the men are told that one of them will die by dawn to serve as an example for the others. It’s up to the prisoners to decide who will be sacrificed.

But then the guard returns with an extraordinary proposition of his own. In years to come it will become an old man’s anecdote, a memory of a moment that once changed the lives of the men that lived it, and once recalled, will define the life of the boy to whom it was told. Without a trace of sentimentality, this powerful fable – a bestselling literary sensation in the author’s native France – is a remarkable addition to the literature of war. Unexpectedly funny, heartbreaking and honestly enriching, it will become a beautiful memory for the reader as well.