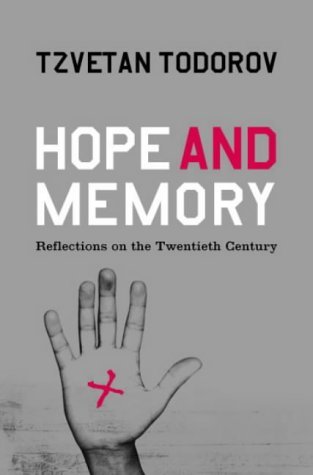 Reflections on the Twentieth Century.

A profound moral and political history by one of the world’s most original thinkers.

In Hope and Memory Tzvetan Todorov, one of Europe’s leading intellectuals, defines totalitarianism as the major innovation of the twentieth century and examines the struggle between this system and democracy and its effects on human life and consciousness.

Todorov’s contention is that totalitarianism imposed itself because, more than any other political system, it fed on people’s need for the absolute: it promised to endow life with meaning by enabling ordinary people to take part in the construction of paradise on earth. As a result millions lost their lives in the name of a higher good. Tzvetan Todorov’s brilliantly incisive book examines the history of the past century by analyzing its spectacular political conflicts and by offering moving portraits of individuals who, at a great personal cost, resisted the strictures of the communist and Nazi regimes.

Hope and Memory is a profound moral and political history by one of the world’s most original thinkers. It demonstrates how, at the beginning of the twenty-first century, the crimes of the past continue to cast long shadows.