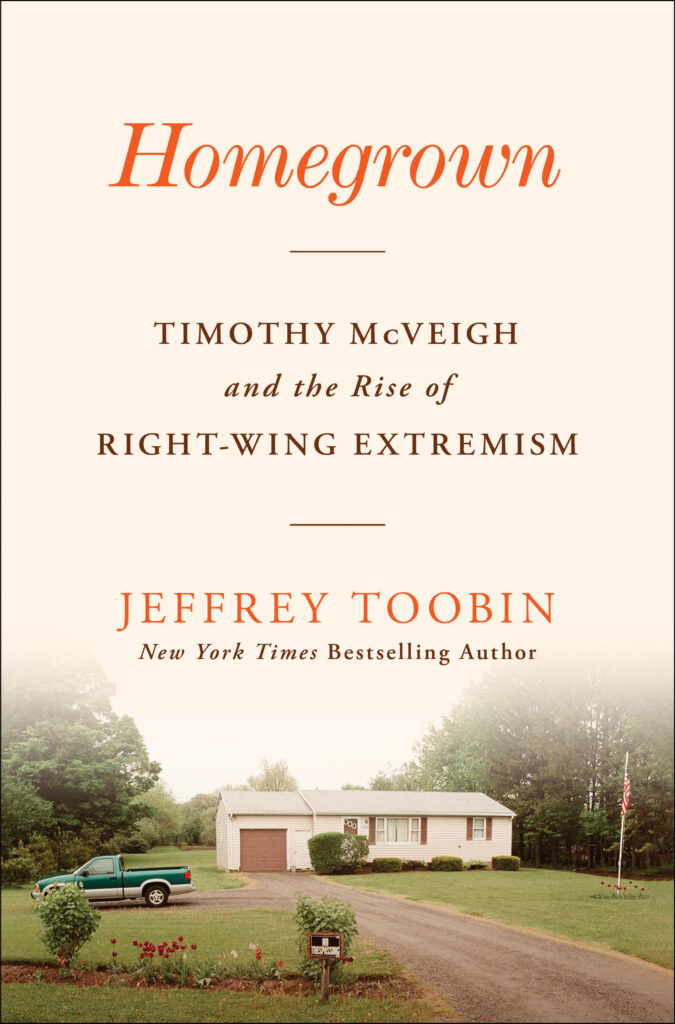 The definitive account of the 1995 Oklahoma City bombing and the enduring legacy of Timothy McVeigh, leading to the January 6 insurrection—from acclaimed journalist  Jeffrey Toobin.

Speaking to his lawyers days after the Oklahoma City bombing, the Gulf War veteran expressed no regrets: killing 168 people was his patriotic duty. He cited the Declaration of Independence from memory: “Whenever any Form of Government becomes destructive of these ends, it is the Right of the People to alter or to abolish it.” He had obsessively followed the siege of Waco and seethed at the imposition of President Bill Clinton’s assault weapons ban. A self-proclaimed white separatist, he abhorred immigration and wanted women to return to traditional roles. As he watched the industrial decline of his native Buffalo. McVeigh longed for when America was great.

New York Times bestselling author Jeffrey Toobin traces the dramatic history and profound legacy of Timothy McVeigh. who once declared, “I believe there is an army out there, ready to rise up, even though I never found it.” But that doesn’t mean his army wasn’t there. With news-breaking reportage, Toobin details how McVeigh’s principles and tactics have flourished in the decades since his death in 2001, reaching an apotheosis on January 6 when hundreds of rioters stormed the Capitol. Based on nearly a million previously unreleased tapes, photographs, and documents, including detailed communications between McVeigh and his lawyers, as well as interviews with such key figures as Bill Clinton and Merrick Garland, Homegrown reveals how the story of Timothy McVeigh and the Oklahoma City bombing is not only a powerful retelling of one of the great outrages of our time, but a warning for our future.

“Anyone trying to understand the violent extremism that led to the shocking assault on America’s Capitol on January 6, 2021, and anyone who thinks that day marked the end of the story, must read Homegrown. Jeffrey Toobin shows convincingly that today’s domestic terrorists are neither new, nor an isolated phenomenon. Their antecedent was Timothy McVeigh, the 1995 Oklahoma City bomber.  As told by Toobin, McVeigh’s story is a nonfiction thriller, both eye-opening, and an urgently-needed warning.” — Jane Mayer, author of Dark Money: The Hidden History of the Billionaires Behind the Rise of the Radical Right

“It’s tempting to believe that the January 6, 2021 assault on the Capitol took the militance of the Far Right to a deadly new level of violent fanaticism. Jeffrey Toobin’s fast-paced, expertly crafted book reminds us that it was all there a quarter of a century earlier, in a horrific mass murder that too many of us dismissed as merely reflecting the mind of an unhinged loner.” — Adam Hochschild, author of ten books, including Rebel Cinderella

“Homegrown—the story of Timothy McVeigh’s 1995 bombing and murder of 168 souls in Oklahoma City—takes its place beside Jeffery Toobin’s finest work.  The writing is propulsive, driven by huge moment-to-moment suspense.  As always, Toobin’s research is impeccable, allowing him to tell much of story through the usually-shrouded words that McVeigh communicated to his own lawyer.  Most important, Toobin draws a straight line from McVeigh, whose crime has been understood sometimes as an isolated act of lunatic savagery, to the right-wing extremists who imperil us today.” — Scott Turow