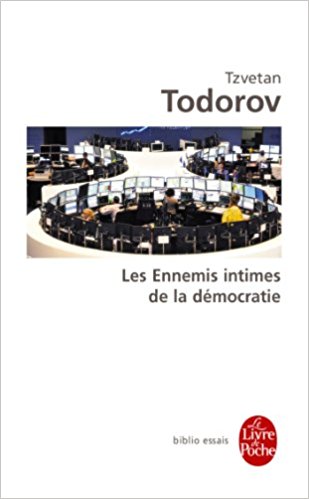 In this thought-provoking and persuasive new essay, Tzvetan Todorov warns against the dangers threatening modern-day democracy.

If the twentieth century marked the rise and establishment of democracy against totalitarian regimes, and symbolically ended with the fall of the Berlin Wall, today many argue that the enemy has shifted to religious extremism, terrorism, and the ruthless dictatorships that go with them. Todorov disagrees: underlining the founding ideas and evolution of the political regime, he asserts that democracy’s biggest threat has become its own hubris.
Following the tradition of European messianism (which paradoxically makes the modern “neocons” the heirs to nineteenth-century colonialists or twentieth-century communists), the United States and a good number of European states have embarked on a crusade to enlighten those deprived of democracy through the use of force, and in the name of a very abstract greater good. Yet this mission to “help” others has led to Abu Ghraib and Guantanamo, the dubious concept of “humanitarian bombs” and a moral crisis of growing proportions.
Todorov argues with force that some democratic values have been distorted and turned into catch-phrases that serve nothing but the interest of a few individuals or corporations. In the context of a globalized, interconnected world, all actions are carried out in the name of our revered “freedom.” The word “freedom” itself is used by the most far-right, undemocratic parties in Europe; “freedom of the individual” becomes the pretext for the concentration of power in the hands of a select few.

Drawing on recent examples such as the wars in Iraq, Afghanistan, and Libya, and his own experience growing up in a totalitarian regime, Todorov returns to examples drawn from the Western cannon (from an obscure controversy between Augustine and Pelagius, to the fierce debates amongst different tenets of the Enlightenment thinkers) to explore the roots of the notions of tolerance and responsibility; he makes a compelling case that the real democratic ideal is to be found in the delicate, ever-changing balance between the social, economic, and political spheres.