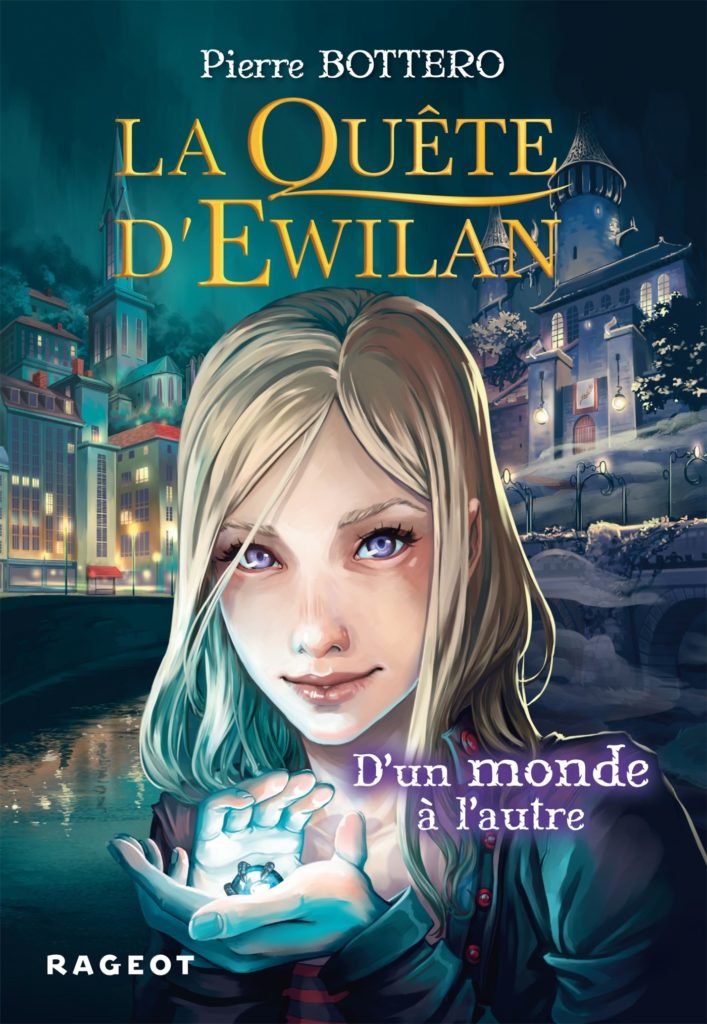 From One World to Another / The Icy Frontiers / Destiny Island

Pierre Bottero died on November 8th, following a motorcycle accident. He was a wonderful author and person, with limitless imagination and unrivaled generosity. He will be greatly missed.

“Death a is a gift we receive from those who leave us. A demanding, oppressive gift, but a gift nonetheless. With it comes the ability to grow, to understand, to broaden our horizons, to learn.” ELLANA, L’ENVOL (with author commentary)

In this enchanting trilogy, Pierre Bottero draws on the rich heritage of the heroic fantasy genre to take the intrepid reader on an unforgettable journey… Ewilan’s Quest has been a huge word-of-mouth success in France, where it has sold over
150 000 copies to date.

Camille is a highly intelligent 13 year-old from a well-to-do family. Bored at school, frustrated with her overbearing adoptive parents and convinced that there must be more to life than her small town has to offer, she frequently escapes into a world of books, spending hours at a time in her parent’s well-stocked library. When she is not reading she hangs out with her best friend Salim, a street-wise kid from the ‘wrong side of town’. Although an unlikely match, in each other they find the companionship and confidence that makes their mundane lives more bearable. Until one day, whilst jumping out of the way of an oncoming truck, Camille suddenly finds herself in an amazing parallel world. In Gwendalavir she discovers that she is in fact Ewilan, the child of two legendary magicians, who sent her to the “real world” for safety when their own lives were at risk. She has inherited an extraordinary gift from them – the ability to draw a mental image of something which then becomes real – and it is for her great mastery of this gift that she has been chosen to save the people of Gwendalavir from the evil forces at work in the kingdom. When she tries to explain all of this to Salim, he is understandably skeptical, but as Camille hones her powers and begins to undertake extraordinary feats in the real world, he is forced to give more credence to her tale and he too soon becomes a frequent visitor to the magical Gwendalavir, where his savvy-ness, strength and agility help Ewilan in her quest to release the guardians of peace and restore dignity and freedom to the kingdom. Over the course of the trilogy (From One World to Another, The Icy Frontiers and Destiny Island) Ewilan is faced with countless gruesome enemies, from warrior pigs to ogres and the “mercenaries of Chaos”, but also finds the help and friendship of a formidable warrior, a wizened sage and a brave Knight, to name but a few. Deftly and with humour, Bottero has created a startlingly coherent imaginary universe that recalls those of J.R.R.Tolkein, C.S. Lewis and Philip Pullman. He has also endowed his characters with a depth and complexity that make them utterly engaging and allow us to follow their emotional development throughout the trilogy. Ewilan’s quest therefore becomes not only a quest to save Gwendalavir and find her real parents, but also a quest for identity, friendship and love. Praise for Ewilan’s Quest: “Bottero has constructed a rich and detailed adventure…with lively, fun and engaging characters.”– Le Monde “A better read than Harry Potter…Crammed with action and originality; one can’t help but devour this trilogy. It’s intelligent, often funny, sometimes moving and always full of suspense.” – L’Alsace