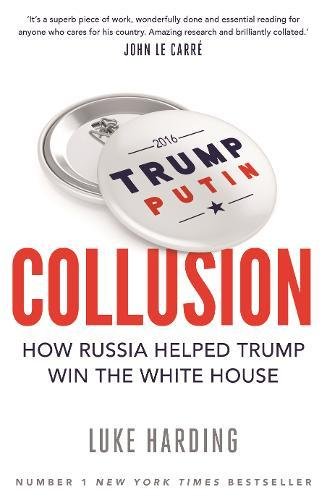 MOSCOW, July 1987. Real-estate tycoon Donald Trump visits Soviet Russia for the first time at the invitation of the government.

WASHINGTON, January 2017. Steele’s explosive dossier alleges that the Kremlin has been ‘cultivating, supporting, and assisting’ Trump for years and that they have compromising information about him. Trump responds on twitter, ‘FAKE NEWS.’

In Collusion, award-winning journalist Luke Harding reveals the true nature of Trump’s decades-long relationship with Russia and presents the gripping inside story of the dossier. It features exclusive new material and draws on sources from the intelligence community.

“It’s a superb piece of work, wonderfully done and essential reading for anyone who cares for his country. Amazing research and brilliantly collated.”

“One uncanny aspect of the investigations into Trump’s Russia connections is that instead of too little evidence there’s too much…That’s why Collusion is so essential, and why I wish everyone who is sceptical that Russia has leverage over Trump would read it. Harding’s book is invaluable in collating the overwhelming evidence of a web of relationships between the Kremlin, Trump and members of Trump’s circle…Even if all the Republicans in Congress read Harding’s book, they probably wouldn’t act. But at least they’d know what they’re abetting.”

“Your long read of the weekend should be The Guardian’s “How Trump walked into Putin’s web” by Luke Harding. Harding is a great reporter, whose work on Putin and his crooked cronies got him expelled from Russia.”

“Benumbed by the daily, hourly Trump-Russia news? Forgot already what happened yesterday? Last week? Last month? Last October? Just finished Luke Harding’s comprehensive Collusion, the first but not the last history of how we got where we are today.”

“Harding at his best. He has sleuthed the Russia-Trump connections with exceptional skill. A fine read and a great contribution to the public domain.”

“One of the best reporters in the world, [Luke Harding] has written the definitive book on the Trump-Putin relationship. Harding’s writing combines the talent of an author with the precision of a chemist.”

“An extraordinary investigation of power, capable of highlighting all of the dark ties between the Kremlin and the White House.”

“If you want to keep on top of the big picture you will find answers in Luke Harding’s book. He writes comprehensively about the many strange connections between Donald Trump’s team and the Russian government, using deep background research. He has the big advantage of not only examining the American side of things, but also being able to competently evaluate Russia and Ukraine from his work as a journalist there. His book is enlightening, a look behind the curtain. Worth reading page after page.”

“The Guardian’s Luke Harding takes a deep dive into the scandal-stuffed Russia dossier. Harding explores the origins of some of the file’s most salacious allegations, and looks into that shadowy figure responsible for its contents, British spy Christopher Steele.”

“Harding is at his best connecting dots that may not always be obvious…If readers emerge from this fast-paced narrative convinced that the Trump White House is a wholly owned subsidiary of the Russian oligarchs, then there’s good reason for it.”

“How this faceoff plays out may determine the fate of the Trump presidency and the fate of many in his administration…. Don’t be surprised if this sparks a stampede of Republicans into lifeboats, desperately seeking to distance themselves from the captain of the ship of state.”

“Harding’s analysis of Steele’s claims is thorough, fascinating, fast-paced and lively, embedded in a chronological account of the madness we’ve all been living through for the past aeon.”

“The reader is convinced long before the flow of information halts. Ultimately, there’s nowhere for the skeptical mind to escape. Give the book to anyone who harbors doubts. The book remains utterly convincing, wins hands down.”

“The book is an important read for anyone who wants to get a little smarter about this whole issue.”

“Luke Harding, The Guardian’s foreign correspondent, collates all the essential information and illuminates it with prodigious research…Harding’s at his best when theorising about how expertly Russia has played the long game in pursuing Trump. An exhaustive, crucial account.”

“Collusion comes in a fever-dream moment in American politics, when the idea that the president could be a wholly controlled entity of the Kremlin remains an open question, and Harding’s book provides something of a pocket guide to a scandal that may yet eclipse Watergate.”

“Harding outlines a gripping portrait of the dense and murky constellation of Trump’s Russian connections.”

“Harding’s work is thorough, engaging, and one would hope a benchmark for a higher standard for journalism… An expertly researched book.”

“If there’s any lesson from Luke Harding’s new book, it’s that even the smallest fish is wise to keep its guard up on anything vaguely involving Russian intelligence.”

“The reader is convinced long before the flow of information halts. Ultimately, there’s nowhere for the skeptical mind to escape. Give the book to anyone who harbors doubts. The book remains utterly convincing, wins hands down.”

“If you’re looking for a book of more substance, that recounts in great detail the corrupt background of Trump’s rise to wealth, prominence, and power, I recommend instead Luke Harding’s Collu­sion: Secret Meetings, Dirty Money, and How Russia Helped Donald Trump Win.”