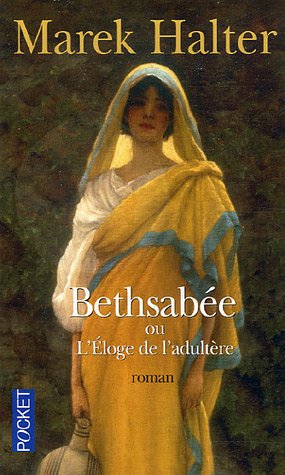 The Story of an Impossible Love

Marek Halter is at his best in this heady tale of illicit love that unfolds against the biblical backdrop of ancient Jerusalem.

Bathsheba is beautiful, spirited and lonely. Her husband, Uriah, a high ranking general in King David’s army has been away at war for countless months, leaving her, like so many other women, to while away her days anxiously awaiting his return. But Bathsheba’s loneliness and anxiety slowly transform into frustration and anger, at the husband who has abandoned her and the King who decreed such a war in the first place. When she hears the brouhaha of the King’s carriage passing through her street, she throws herself towards it, vaguely intending to make her feelings known. Her servant pulls her away before she is hurt, but not before an intense look passes between the irresistible King David and the instantly impassioned Bathsheba. A renowned womaniser who is used to getting what he wants, David wastes little time in tracking Bathsheba down and summoning her to the palace. Initially she refuses, filled with guilt at the thought of Uriah and painfully aware of the punishment accorded to adulterous women: death by stoning. But she is haunted by the feeling of the King’s gaze upon her, and there is only so long she is able to hold out against the will of her entrancing ruler and her own fervent desire… Thus begins an impossible love that leads to lies, betrayal and ultimately murder, but will also give birth to a future King of Israel whose exceptional destiny will be remembered for generations to come.