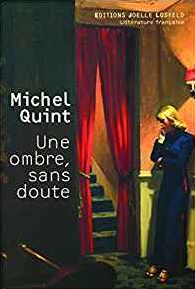 A Shadow, No Doubt

“Carried by a style of writing which is both poetic in its descriptions and thorough in its dialogues, this novel talks about illusions and lies, it mixes time frames to show us that history hesitates and that no one is ever entirely innocent.” Lire

George has returned to the village in northern France where he was born. His parents died a few weeks earlier – within days of each other – and he has come to empty their home. Every day he meets Augusta, an old family friend, in a parked car. Each day, Augusta tells him a little more about the Second World War, his parents, the village, the love stories and disappointments, secrets and regrets. George listens attentively, allowing the murmurs of the past to sink in. Under Nazi occupation, Valentine, George’s mother, was a dressmaker running a workshop with four other women from the village. One evening while Valentine and Augusta were working after curfew, an English parachutist, Rob Wilson, sought refuge in their workshop. As soon as he appeared, the fate of these three lives was intertwined forever. The two women both fell in love with Wilson, who in turn only had eyes for Valentine. They decided to hide Wilson’s ID papers in a wooden mannequin, while Roger, Valentine’s father, and Paul, her husband, hid the Englishmen in their barn. They taught Wilson the local dialect so that he could pass off as a farm hand. And all the while, the two women were constantly vying for Robert’s attention. On the night of the village fête, Robert and Valentine danced together all evening, blissfully unaware of what was going on around them. And out of jealousy, Augusta denounced Robert to the Gestapo… Listening to Augusta, trying to fit together the pieces of the past, George is haunted by one burning question: could the English hero have been his father? Michel Quint’s tour de force, colored with bitter-sweet nostalgia, brings alive a cast of ghosts from the past: Rainer Goetz, the German officer, and his friend, Fred, the Jewish pianist; and his sister; Toinette and the Parisian crowd from the Popular Front; Dolores, who stumbled into the Spanish Civil War… With grace and precision, Quint carves out the moving tale of simple people, caught in that moment in time, and whose love stories and betrayals cast a distant and yet familiar shadow on the present.