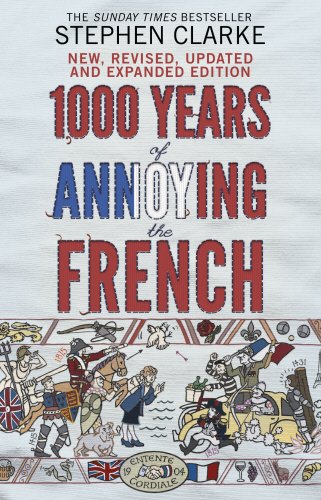 1,000 Years of Annoying the French

Selected as One of the Best History Books of the Year by Amazon UK.

“Tremendously entertaining.” – Sunday Times
“Relentlessly and energetically rude about almost every aspect of French history and culture.” – Mail on Sunday

With the A Year in Merde series having sold 2,000,000 copies worldwide, Stephen Clarke now peers into those murky waters, taking us through all the times when Britain and France have been at war – or at least glowering at each other across what the Brits provocatively call The English Channel.

Starting with the Norman (not French) Conquest and going right up to the supposedly more peaceful present, when a state visit by the French President becomes a series of hilarious historical insults, 1,000 Years of Annoying the French is a light-hearted – but impeccably researched – account of all our great fallings-out.

Along the way it also dismantles a few myths that French historians have been trying to pass off as truths. They boast, for example, that the last time Britain was invaded it was by Frenchmen – the Normans. But in fact, William the Conqueror was an avowed enemy of France and regularly attacked the French King. France also blames the treacherous Anglais for killing Joan of Arc, but she was burnt after being captured by French soldiers and tried as a witch by Parisian monks. The wackiest claim of all, though, has to be the accusation that the Brits killed Napoleon by poisoning his wallpaper.

Ten centuries’ worth of similar French historical “facts” bite the dust – as Stephen Clarke proves, the French didn’t invent the baguette, the croissant or the guillotine, and would have taken the bubbles out of bubbly if the Brits hadn’t created a fashion for fizzy Champagne. Even the French Revolution is a bit of a myth – the Bastille contained only a handful of prisoners when it was stormed, and the 1789 uprising wasn’t an attempt to make France a republic at all – the first revolutionaries wanted a “British-style” monarchy.

In short, the French are quite right to suspect that the last 1,000 years have been one long British campaign to infuriate them. And this book probably isn’t going to make the entente any more cordiale…