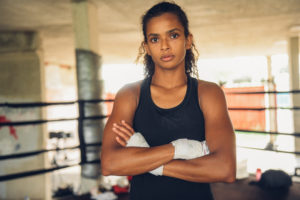 Ramla Ali is a boxer and model. She is a three time national champion in England and the first Muslim woman to win an English title. She is also a multiple International Gold medalist and the first boxer male or female to have won an African title whilst representing the country of Somalia. She was one of the 15 women featured as “Forces for Change” on Meghan Markle’s Vogue cover, alongside Greta Thunberg and Jacinda Ardern. She is one of Time magazine’s Next Generation Leaders, an exclusive Global Athlete for Nike and an ambassador for UNICEF, Pantene and US fashion brand Coach.

She was born in Mogadishu, but came to the UK as a baby in the early 1990s after her brother was killed by a mortar shell in the fighting there. She grew up with her family in East London. As a teenager she was bullied for being overweight, so she started going to the gym where she discovered boxing and became hooked. She has a law degree from SOAS, and briefly worked in a City law firm, before finding her way back to her first love: boxing. She is now managed by Anthony Joshua and is hoping to compete for Somalia in the 2020 Olympics.

Film4 are making a feature film based on her life story with the producer of Oscar-winning The Favourite.