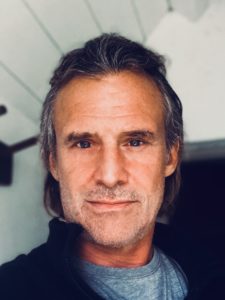 Mark began his career as a screenwriter, before turning to novels. His first book, Amagansett – a murder mystery set on Long Island in 1947 – won the British Crime Writers’ Association debut Dagger, and became a National Bestseller in the U.S.. His second mystery, The Savage Garden, took 1950s Italy as its setting, and was a No.1 Bestseller in the U.K.. Subsequent crime thrillers have included The Information Officer, set on the island of Malta during World War Two; House of the Hanged (retitled House of the Hunted in the U.S.), based in the south of France in 1935; and Where Dead Men Meet, a chase thriller that carries the reader on a breakneck journey across Europe in 1937, from Paris to Venice. He broke away briefly from the crime genre with Waiting for Doggo, a comedy about the troubled relationship between an advertising executive and a rescue dog.