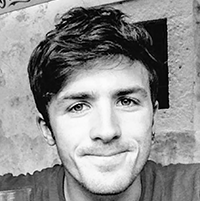 Joshua Cunningham is a writer and photographer specialising in travel, sport and adventure.

Bypassing university in a bid to forge a career as a professional racing cyclist on the roads of Europe, Josh fell into writing after becoming increasingly involved with the media during his sporting career, and after retiring from full-time racing in 2013 he joined the Cyclist Magazine editorial team at Dennis Publishing.

In periods spent as a freelancer Josh has contributed to a selection of other titles, including Men’s Fitness, Coach and Avaunt. He has conducted interviews with figures ranging from Olympic champions like Sir Bradley Wiggins to UK foreign secretary Boris Johnson, as well as covering events such as the Tour de France and writing travel-based features on destinations worldwide. His photography has appeared in print and online for both sport and travel magazines.

His first book, Escape by Bike, published by Thames & Hudson, comes after a 21,000km cycling expedition from London to Hong Kong that Josh undertook in 2015. The book is part travelogue and part practical advice guide to adventure cycling and cycle touring, using his photographs from the journey and the experiences gained from years of travel, adventure and riding bikes.