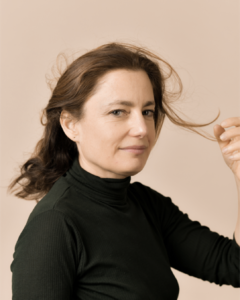 Colombe Schneck became a writer by accident. While reading a glossy magazine, she learned that her grandfather was assassinated by his lover, who cut him into pieces and travelled through France with his body in his suitcase. Since then she’s been obsessed by the truth and written about the many secrets of her bourgeoise Parisian-Jewish family.

The author of eleven books of fiction and non-fiction, she has received prizes from the Académie Française, Madame Figaro and the Society of French Writers, as well as having been short-listed for the Renaudot, Femina, and Interallié prizes.

The recipient of scholarships from the Villa Medicis in Rome and the Institut Français, as well as a Stendhal grant which allows French writers to do research and write abroad, she also spent fifteen years as a broadcaster for Canal Plus, France TV and Radio France. She is currently working on a novel about the chic, picture-perfect Swiss summer camp where she spent her holidays as a kid, and the grim secret of how it destroyed two of its children.

She was born in Paris in 1966 where she still lives, is a graduate of the Institut d’Etudes Politiques de Paris and Université de Paris II with a degree in Public Law.