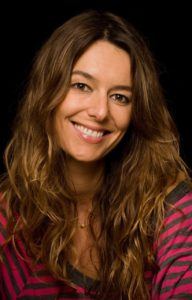 Alexandra Potter is the bestselling author of eleven romantic comedy fiction novels. These titles have sold in twenty-two territories and achieved worldwide sales of more than one million copies (making the bestseller charts in the UK, US, Germany, Slovenia, Serbia and the Czech Republic). She has previously sold film rights to three of her titles; What’s New, Pussycat?, Calling Romeo, and You’re the One I Don’t Want.

She is an author known for her warm sense of humour, sharp, witty dialogue and relatable characters with big hearts that will make you both laugh and cry. This has translated into rave reviews and nominations and several of Alexandra’s titles have won her acclaim. In 2008 Me and Mr. Darcy won the Best New Fiction Award at the Jane Austen Regency World Awards and in 2016 Alexandra made the shortlist for the Romantic Novel Awards (RNA) when Love From Paris was nominated in the romantic comedy category.

Alexandra has also contributed short stories to several anthologies: Girl’s Night In, published in aid of the international charity, WarChild; Jane Austen Made Me Do It, sold in both the UK and USA, and Sunlounger 2 – Beach Read Bliss, which featured her short story Dreams of Pushkar which was subsequently chosen to appear in My Weekly magazine. She also made her foray into radio when her short story It’s A Guy Thing was broadcast on BBC Radio 4. Alexandra has also written for many magazines, including most recently Women and Home and The Telegraph’s, Stella Magazine.

Alexandra’s new novel, The Confessions of a Forty-something F##K Up is Pan Macmillan’s lead title in the UK for Dec 2020. Foreign rights have already been sold in nine territories and there is serious TV/Movie interest.

Alexandra was born in Yorkshire and attended Liverpool University where she gained a BA Hons in English Literature. She moved to London in her early twenties to work as a sub-editor and feature writer for many of the women’s monthly magazines, before relocating to Sydney, Australia for a year to work at Vogue. Determined to write ‘that book she was always talking about’, before she was thirty, she wrote several chapters of her first novel and was signed to Stephanie Cabot at WME, (now at Susanna Lea Associates). Within days of handing in the finished manuscript a bidding war broke out and her first novel was published to huge acclaim in 2000, a week before her birthday. Alexandra lived for several years in Los Angeles where she met her Californian husband. After convincing him to swap year-round-sunshine for a decent cup of tea, she now resides full-time in London.