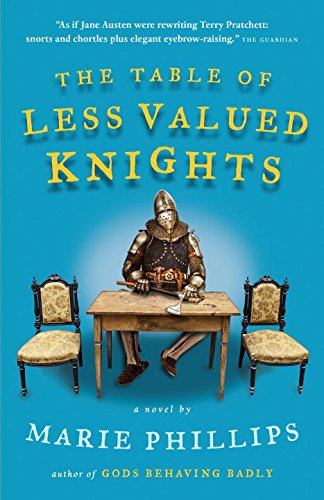 The Table of Less Valued Knights

LONGLISTED FOR THE 2015 BAILEYS WOMEN’S PRIZE FOR FICTION

“Bathos, bawdy, and the absurd – a combination of uncommon felicity, as if Jane Austen were rewriting Terry Pratchett.” – The Guardian

Sir Humphrey du Val of the Table of Less Valued Knights – Camelot’s least prestigious table, boringly rectangular in shape and with one leg shorter than the other so that it always has to be propped up with a folded napkin to stop it from rocking – has been banned by King Arthur from going on quests, and hasn’t left the castle in fifteen years. He’s tempted out of his imposed retirement by Elaine, who is looking for her kidnapped fiancé. But is she really the damsel in distress that she appears to be?

Across the border in Puddock, the new young queen, Martha, is appalled to be married off against her will to the odious Prince Edwin of Tuft.  She disguises herself as a boy and runs away, but doesn’t get very far before the Locum of the Lake – standing in for the full-time Lady – intercepts her with some startling news: Martha’s brother, the true heir to the throne of Puddock, is not dead as she believed, and Martha must go on her own quest to find him.

The two quests collide, entangling Humphrey, Elaine and Martha’s lives, and introducing a host of Arthurian misfits, including a freakishly short giant, a twelve-year-old crone, an amorous unicorn, and a magic sword with a mind of her own.

Praise for The Table of Less Valued Knights:

“Bathos, bawdy and the absurd – a combination of uncommon felicity, as if Jane Austen were rewriting Terry Pratchett: snorts and chortles plus elegant eyebrow-raising. It’s some shtick… With The Table of Less Valued Knights, she has clearly established her brand: bold literary and historical misadventures, told with a twist and a lightness of touch”
– Ian Sansom, The Guardian

“There are so few genuinely funny novelists around that this stands out as noteworthy … Beneath the romping humour and fast pace is a genuine plea for the shy, feminine, humane and deviant to be understood and valued … Phillips, like all of the best comic writers, dares to make a serious point.”
– New Statesman

“Non-stop funny. You will never go back to round tables. Marie Phillips’ knights are big-hearted, hilarious, and better than heroes. How does she do it? Make us laugh, while denting our armour? She’s a comic genius.”
– Jessica Grant, author of Come Thou, Tortoise

“A fractured fairy tale that makes more sense of the modern world than any other book you’ll read this year. The story and writing are enchanted!”
– Andrew Kaufman, author of All My Friends Are Superheroes