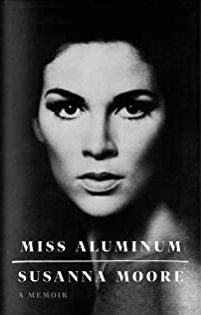 A revealing and refreshing memoir of Hollywood in the 1970s.

In 1963 after the death of her mother, seventeen-year-old Susanna Moore leaves her home in Hawai’i with no money, no belongings, and no prospects to live with her Irish grandmother in Philadelphia. She soon receives four trunks of expensive clothes from a concerned family friend, allowing her to assume the first of many disguises she will need to find her sometimes perilous, always valorous way.

Her journey takes her from New York to Los Angeles where she becomes a model and meets Joan Didion and Audrey Hepburn. She works as a script reader for Warren Beatty and Jack Nicholson, and is given a screen test by Mike Nichols. But beneath Miss Aluminum’s glittering fairytale surface lies the story of a girl’s insatiable hunger to learn and her anguished determination to understand the circumstances of her mother’s death. Moore gives us a sardonic, often humorous portrait of Hollywood in the seventies, and of a young woman’s hard-won arrival at selfhood.

“Striking . . . a personal statement of empowerment: [Moore] came, she saw, she took notes, and she left to become a novelist and a miss-no-detail student of female autonomy.” ―Lisa Schwarzbaum, The New York Times

“A captivating portrait of a woman in search of herself.” ―Kirkus Reviews

“Now seventy-four, and a well-regarded author, Moore is ready to expose her “shadow self” and the pain of her early life . . . One gets a sense that what is revealed has been chosen appraisingly, not out of coyness but, rather, out of something resembling an architect’s appreciation of a structure’s good bones. Moore’s writing has the slightly mysterious sense of detachment that she adopted when building her persona, many years ago, though paradoxically this is what makes her revelations, when they come, more piercing.” ―Naomi Fry, The New Yorker