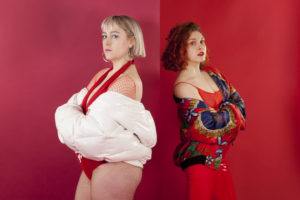 Mary Higgins and Ell Potter are best friends and ex-girlfriends. Really and truly.  They are also co-founders of Hotter Project and co-creators of the stage-show Hotter.  Hotter stormed the Edinburgh Fringe Festival for 3 years to immense popular and critical acclaim, before transferring to London, where it sold out 3 week-long runs at Soho Theatre and received multiple 5 star reviews (“scorchingly enjoyable…riotously funny” – Evening Standard; “Hilarious, sincere, sexy and brutal” – The Guardian).  Their second show, Fitter, sold out its five-week debut run at Soho Theatre in December and has been nominated for an Offie.